As those of you who followed me before the upgrade explosion and glorious rebirth of this blog know, I decided this year to take part in #NewYearNewArmy for my Warhammer hobby, after almost quitting entirely due to time restrictions and just generally being in an unbalanced and bad place. Part of the reason for focusing on this is to bring balance and good completely non-work related hobby. As an aside, my core group of game friends here had decided to start new 40k armies and have quarterly meetups and games to keep us all on target to finish up a 2000 point fully painted army by the end of the year. Then my local GW store started their own #NewYearNewArmy set up, so doubly motivated I was ready to go!

I chose Nurgle originally as I kind of like their wicked cruelty mixed with humor in the background – I don’t usually mind playing the villain in games because I either win (yay!) or the bad guys the story lose (also yay!). I wrote up a fun background for them for the Vigilus Campaign at my local Games Workshop store in Glendale (which I may repost here later) but after playing a couple of games with them (and some other more personal reasons) I decided they weren’t for me.

I did a lot of soul-searching and and discussion with my good friend Shep about what army I should do. The army he pitched to me after doing some deep thinking was Harlequins. Not gonna lie, my first reaction was, “uh… maybe?” Don’t get me wrong, I have loved these guys since I first got the metal box way back in the late 80s – in fact, they were my first “big” Warhammer 40k army. They are an elite, tricky, speedy army which kind of ticks all of my boxes, so why wasn’t I more excited?

After unpacking some of my feeling and thoughts, I came to realize that the hang up was entirely because I used to have a full and awesome Biel Tan army that was stolen from me by a friend who left LA never to be seen again. After that happened, any time I thought about playing the Space Elves I ended up feeling a bit of that resentment. We are strange creatures, because I wasn’t even consciously aware that I was still holding a resentment and bitterness toward Mike and it was manifesting in my dislike for an army whose aesthetic and play style are totally me. Once I realized this and was able to process and forgive both him and myself, I found myself getting SUPER EXCITED about the idea. I built out my first models which are a Troupe, a Troupemaster, a Shadowseer, and a Death Jester. These models are ridiculously gorgeous and not a little bit intimidating to get going, but I’m looking forward to the challenge!

I have some catchup to play in order to get back on track for the New Year, New Army train, but I am confident I can do it – thanks in large part to the elite nature of this army. Beyond just the model and army, I am also really getting into the background and setting up a whole alien terrain set for my table. Here is what I have built and primed so far, with a bit more in boxes and ready to be built! A big thanks to Shep for his help and more importantly, his friendship and in knowing me so well. 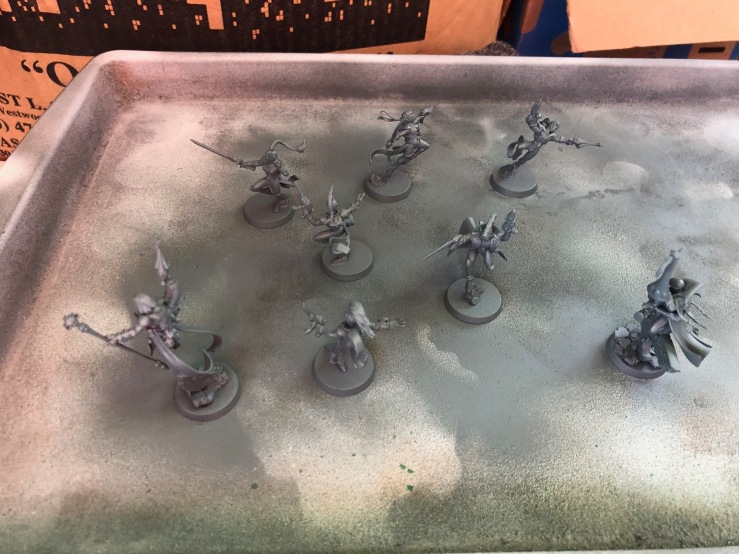 As an aside, I should have posted this yesterday, but it was a crazy day (can’t wait until Girl Scout cookie season is over!), so will likely make two posts today.